Embrace a realm of family secrets…

Herman Anderson, assistant to The Great Dagmaru, returns to her hometown—the first stop on their magic tour. Her family has moved without a trace.

Stephen Dagmar, a powerful stage magician, sets out to live his dream … until Herman’s father makes a prediction and resolves to come between them.

Darkness descends when the reality of the Dagmar’s incubus bloodline surfaces for the first time in over a generation.

And the consequences may be deadly.

A Gothic tale of beauty and intrigue, this sequel to the award-winning novel “The Magician’s Curse” will chill you and leave you breathless for more.

Escape into the twists and turns of this extraordinary romance.

This is the second in The Great Dagmaru series.

The first book, The Magician’s Curse was one of my top reads of 2018.

A Magician’s Blood was everything A Magician’s Curse was and more. This can be read as a stand alone but i’d really urge you to read the first book if you haven’t already done so.

For me it felt like only a minute ago I put The Magicians Curse down with a heavy heart. This series is one of those delicious kinds where you’re hungry to devour the book but don’t want to finish it at the same time.

The characters are so rich and addictive, as is the story. In The Magician’s Blood we find out more about Hermans family and the link to the magic within it. Stephens character is just great for a reader, he’s sexy and mysterious.

Linda has the knack of weaving her descriptives in a way that you feel like you are living inside the book.

Another 5* installment! I can’t wait for the third. 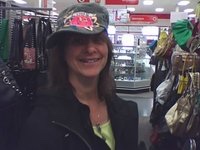 Linda G. Hill was born and raised an only child in Southern Ontario, Canada. She credits the time she spent alone when she was growing up, reading books and building worlds and characters of her own to keep her company, as the reason she became a writer. A stay-at-home mom of three beautiful boys, Linda is a graduate of the Writing Program at St. Lawrence College in Brockville, Ontario. Aside from caring for her family, she enjoys traveling the world, eating trout cooked on the barbecue, and, of course, reading.

Where To Find Linda